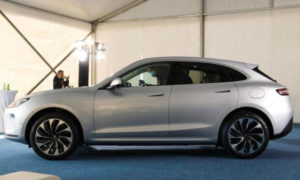 Wenjie M5 is officially launched. The car is built on the DE-i pure electric drive range extension platform. It is also an extended range electric car with the ideal ONE, Lantu FREE and other models. It is worth mentioning that this car is considered a A car produced by Huawei, why do you say that?

The Wenjie M5 is the first model under the AITO brand, which is a high-end new energy vehicle brand jointly created by Huawei and Celis. In the future, the brand will also release a medium-to-large SUV. The price range of this car is 249,800-319,800 yuan. From the price point of view, the price of the Wenjie M5 is not very expensive for a medium-sized extended-range electric vehicle, but it is not cheap. After all, the Wenjie M5 is not expensive. It is not a model of a well-known brand. Although it is blessed by Huawei, Huawei cannot be regarded as a real car OEM, but is dedicated to providing intelligent ecology for major car companies.

In terms of appearance, Wenjie M5 adopts the design of the Seris SF5 as a whole. From the overall appearance, one would even think that this is a “shell car” of the Seris SF5, but in fact, the two cars still have certain characteristics. difference. On the front face, the M5 adopts a large-sized air intake grille, and the overall design of the vehicle is relatively simple, which is in line with the characteristics of a new energy vehicle. At the rear, the Wenjie M5 adopts the popular through-type taillights, with a simple rear design, which brings a good visual effect.

In the car, the Wenjie M5 also adopts a relatively simple design, especially the overall interior layout is very similar to Tesla’s models, but the Wenjie M5 retains the design of the full LCD instrument panel. The most important thing inside is actually the 15.6-inch central control screen of the Wenjie M5. The display effect of this central control screen is very good. It looks like a large Pad. It has a built-in Harmony OS multimedia system and can log in to a Huawei account. , to achieve seamless connection between the car and the mobile phone.

In addition, in terms of configuration, the mid- and low-end models of Wenjie M5 can be equipped with HUWWEI SOUND audio and HUD head-up display, while high-end models are standard, and this car is equipped with Nappa leather seats as standard, with front seats as standard The seats are heated and ventilated, the second-row seats are heated, and the mid-spec model supports the massage function of the front seats. The overall configuration is good enough at this price.

In terms of power, all M5 models of Wenjie are equipped with extended-range power, mainly composed of 1.5T four-cylinder range extender and motor, but the car is divided into two different versions: single motor and front and rear dual motors. The single-motor version has a maximum power of 200kW; the dual-motor version is divided into two versions with different powers, the performance version has a total power of 315kW; the flagship version has a total power of 365kW. As for the battery life, the entire Wenjie M5 model adopts a 40kWh ternary lithium battery, and the WLTC pure electric cruising range is 150km. At the same time, the car supports fast charging and slow charging. From the perspective of the power and battery life of Wenjie M5, in fact, the performance of this car is quite good. After all, for extended-range electric vehicles, the combination of range extender and motor can bring good battery life. It is also very strong, which can actually be found in the M5.